A donkey Sandwich in Beijing China sounds disgusting, but actually this common asian treat is rather delicious. Soft, tender, and super flavorful, I equate it to a “Peaking Pastrami” if you will. Here, I risk, life, limb and indigestion to try this new delight.

This is a special episode of TravelClast that is honoring the Sandwich King of Astoria Charlie Gordon who made the absolute best bites over at the Sal, Kris & Charlie’s Deli in my hometown. RIP to the man who always said “everyday is a holiday” especially if you had a sammy in your hand. You will be missed pal.

You can see more sandwich madness on http://www.mmas.tv or stay tuned right here at the TravelClast.

Shanghai! City of the living!

Not too long ago I found myself in this fantastic city on a shoot and after we wrapped our producer was lovely enough to take me and my DP out on the town to savor the delights that Shanghai had to offer. Strangely most of these delights came in liquid form, more specifically in this clear, liquid-lighning-bolt, lighter fluid called Baijui.

It started out friendly enough, but before I realized it it was 3am and we were in a tattoo parlor inside of a bar, and I had drunk something with a snake and starfish marinating in it. Now I have a permanent reminder of that night, and this video to jog my memory if I ever dare to forget it.

WARNING: The following is a true story. This could happen to you.

That’s what Tara Toppino said to me holding out her IM Corona Old Boy lighter. “You need a lighter.” It was a beautiful gesture, giving me something that she held dear, such a beautiful piece of hardware, done at a moment that did not call for a gift or reward. I did not do anything special nor was it a date that held some importance, and that really was the gift, and something I never forgot.

Fire is important. It is the basis of modern civilization, what separates us from murdering beasts and keeps us winning the odds against nature. It allowed us to survive in places we biologically couldn’t, to reach places that were not of our own planet, and to develop the brainpower by cooking protein to do everything we’ve done to this moment.

So yeah, a lighter is important.

There are few things I leave the house without; a bandana, my cellphone, and my IM Corona Old Boy lighter.

For me it’s perfect. Classy and understated, sophisticated yet simple. It turns heads but not at breakneck speeds, and it always lights, always. It has a secret plunger in the bottom that can be used to open the fuel screw, aerate a good cigar, or do a bump of cocaine off of. It has lit countless cigarettes, campfires, and birthday candles around the world. It’s my tool of choice and I never leave without it.

Which is why I will never go back to Shanghai.

Butane lighters are legal on planes, although that doesn’t ever stop me from having trouble with the TSA. They don’t see many lighters like this and think it’s a torch lighter, which it is not. Showing them that is difficult, because they don’t let you light the lighter, for fear it might end the world. They are also to ignorant most of the time to listen on how to operate it. Despite these hiccups its never been confiscated, even if I have to patiently explain the function of my Old Boy.

This does not apply in Shanghai.

“No lighters.” period. That was the last word. I pleaded and argued but “no lighters” was it. China isn’t really a place you want to fuck around with authority, but this lighter meant a lot to me, and it isn’t cheap to replace either. I took the fuel screw out and let out the butane as a gesture of good will, which didn’t go over well, and didn’t change any policies they had towards “no lighters”.  I couldn’t send it home, and I couldn’t bring it with me. Thats when my friend whispered in my ear “my bag is open right behind you. Just drop it in and say you’re going to leave it with a friend outside.”

I did. He went into the terminal, I explained that someone outside was going to take it for me.

I started to walk out when I was stopped again. Seems like my traveling companion had bought an electronic lighter as a gift for his wife, which also wasn’t allowed. Now the guard wanted both lighters, in their hand, now.

Except mine wasn’t there anymore.

You think to yourself “don’t sweat” as in literally “do not sweat” as in “do not produce liquid out of your skin” not in a California circa 1980’s “don’t sweat man” way. It doesn’t work. You sweat. You smell the fear of a Chinese prison because you didn’t want to give up your lighter.

“What?! Ok, ok coming!” I shouted pretending to hear an imaginary friend outside of security, “be right back guys…” I said, grabbed my friends electronic lighter, and I closed my eyes as I walked out of security waiting to feel the snake bite of bullets riddling my body. I walked slowly fast, down to the postage center, where two very bored men sat in a grey room. Seems like post offices are equally depressing around the world. I took out the electronic lighter and pointed to the sign that said “ship items to United States” at which they shook their head and pointed to the sign that said “No lighters”. What was this country’s hatred to lighters all about?! I nodded, worried now that I might miss my flight and have to live in China forever, without a lighter, and slid my friend’s gift lighter across the table.

“Gift. For you.” as the two men stared at me with blank faces I shrugged and left, double time back to security. The movement of truth was before me. They paused at my already stamped passport, said some words to a stern looking woman with a special hat, who then was called over by the guy that gave me the lighter trouble in the first place. They talked with severe eyes while looking back over at me. I was done. “That’s the American that tried to blow up the plane with the lighter. Said he was going to ship it downstairs. Likely story!” They probably didn’t say. Then the well millinered sergent got on the phone. She was calling the post office.

She hung up the phone and came over to me. I wonder if they could shoot canes at someone. The ultimate punishment. Instead she waved me through with a mixture of disgust and apathy that was greeted with a very subtle but humble “xie xie” from me.

“Man, you stink.” The B.O. from fear is not to be mettled with. It no longer mattered and I was through. Jerry casually gave me back my lighter. We made it Old Boy. We did it once again.

Back in the states I wrote IM Corona in Japan. My fuel screw was missing, left on a security counter at the Shanghai airport. Three days later they sent me one free of charge. Now that is service.

I have other lighters that I’ve collected. Table lighters from motocross rallies in Italy, old submariner lighters, WWI trench lighters, Hippie enamel lighters, trashy tourist lighters, even a 1922 silver Dunhill from London. I love them all, but it’s the Old Boy that you’ll find next to my hip everyday. It’s not the same Old Boy that lovely Ms. Toppino gave me nearly a decade ago; that lighter and three like it have been given away to friends who happened to admire the Old Boy just like it was given to me. Seems only right, and sometimes the ritual is more important then the action. 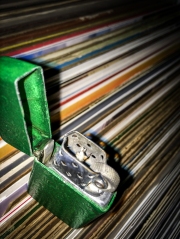 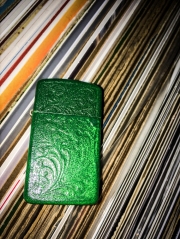 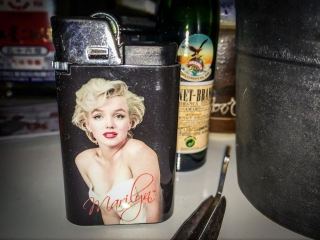 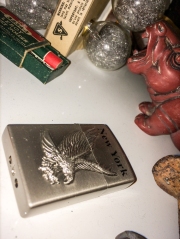 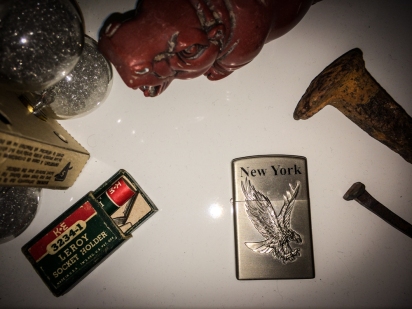 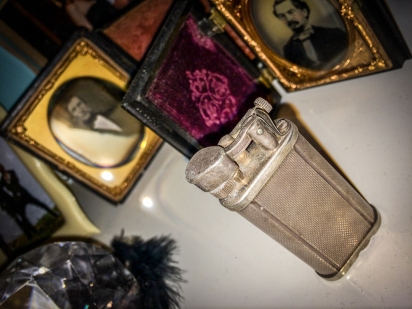 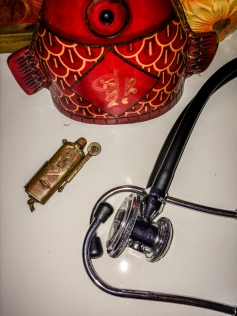 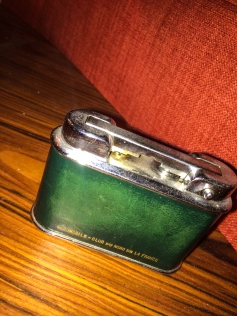 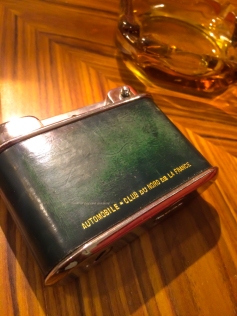 It’s times like this I remember the Lighterman’s Creed:

This is my lighter. There are many like it, but this one is mine.

My lighter and I know that what counts in life is not the butane we exhaust, the noise of our spark, nor the smoke we make. We know that it is the fire that count. We will fire…

Before God, I swear this creed. My lighter and I are the defenders of my country. We are the masters of our enemy. We are the saviors of my life.

So be it, until victory is mine and there is no enemy, but peace!

Roberto Serrini is a professional traveler who records his adventures in word, photography and film. He is a staff writer for Get Lost Magazine, a senior contributor to Trip Advisor, as well as a commercial film director and drone pilot. His work can be seen at www.robertoserrini.com where he can be contacted as well.