A donkey Sandwich in Beijing China sounds disgusting, but actually this common asian treat is rather delicious. Soft, tender, and super flavorful, I equate it to a “Peaking Pastrami” if you will. Here, I risk, life, limb and indigestion to try this new delight.

This is a special episode of TravelClast that is honoring the Sandwich King of Astoria Charlie Gordon who made the absolute best bites over at the Sal, Kris & Charlie’s Deli in my hometown. RIP to the man who always said “everyday is a holiday” especially if you had a sammy in your hand. You will be missed pal.

You can see more sandwich madness on http://www.mmas.tv or stay tuned right here at the TravelClast.

So. The food. Here. Is incredible.

If you are from New York, and you go to China, you will quickly find out that the delicious, hang over cure food you have been lovingly adoring all your life is anything but Chinese food. It can come as a stark revelation as you pine for your ol’ friend Kung Pow, but here in Thailand you get, for the most part, what you know and love as Thai food.

You think we have a food truck culture in NYC? 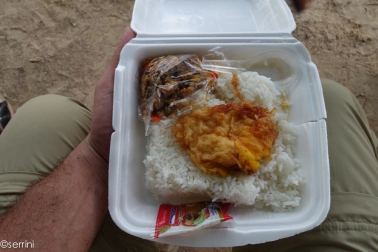 Lunch. Rice would be my new best friend for a while. 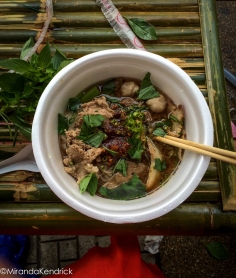 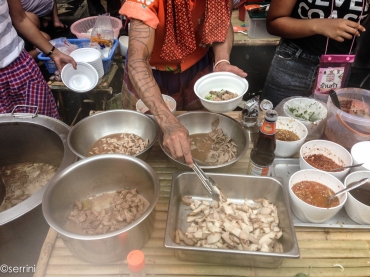 It may be that the ingredients are basic, and usually the same, but the Thai food here is just like home if not just a hellova lot better. The lemongrass is fresh, the basil full of kick, and the rice itself has flavor, not just boiled tap water taste. No matter where I was or who was cooking the food was to die for.

That’s not to say that I didn’t crave some variety. One day, rained out, we were pretty much prisoners of our little living complex. So like any good American I decided to throw money at the problem, and proceeded to buy every snack the little bodega had downstairs. Bored, in my little room, I decided to do a little video snack review. The following is the genius that was yielded. It’s easily my best work to date:

Don’t get me wrong, I loved these snacks. The stranger the better. One of the highlights for me traveling is snack culture. Snacks are a special type of food; they are a common agreement between the people of that country that have been standardized and widely distributed. While you might argue about a common dish, or a sports team, snacks, for the most part, are something that everyone can agree on across a geographic and sociological region. You can learn a lot from a people’s snack, like for instance that “Mexican” is a flavor and not just a people.  It’s also extremely tasty.

Thailand snacks are wonderful. They have many “SunChip” variety crisps, and love to flavor things with shrimp which blows my mind. They also have orange mint Oreos which seems like a mouth sin, and some of the spiciest damn chips you can eat. All of which, including the orange mint mindfuck Oreos, go great with Leo beer.

And when I thought I had tasted the finest that Thailand could possibly offer, that my friends is when I was introduced to Mukata:

Mukata is originally Mongolian. Mongolian soldiers would cook in their bronze shields ever evening on the desert plains. They would basically pool together everyone’s food, whatever was available, and share a meal. It’s shaped sort of like a giant lemon juicer; a ringed ridge holds broth while in the middle you place your meats on a vented mountain of metal. underneath you put coals to heat your meal. The idea here is that you start with a broth; chicken, vegetable, buffalo stock, even just lemongrass water. Then as you cook your meats Korean BBQ style and all the drippings runs off into the broth. As you eat and as the dinner gets longer, the broth becomes even more delicious. It’s nothing less then epic.

Like they did thousands of years ago our little tribe of crew members pooled together our bits of food and drink, and in lue of a desert tundra we sat in the parking lot laughing and eating and drinking. Everyone brought what they have; tonight we had a bit of shark, buffalo, and mantis shrimp. A strange combination that makes a surprisingly delicious broth. It’s nothing, just community, and that’s enough to fill belly and soul.

Finally, what is a meal without a local digestif; ya dong.

Yep, it tastes like it sounds, pretty much like gangsta dick, or at least what I imagine gangsta dick taste likes. It’s basically your common grain alcohol (rice moonshine) that has been “flavored” with “aromatic herbs” (should read “turned a color by putting weeds in it”). It’s not Fernet Branca but I will say it does pack a punch and offer you a pretty lovely head.

Ya dong is sold wherever parking lots are found, usually by dudes you wouldn’t trust watching your dog while you popped into the OTB. Don’t be fooled by the Hong Thong label; this is street whiskey, they just use whatever bottle they can get their hands on, this one being Hong Thong. The cost is so laughably low that it’s not really worth mentioning. What is worth mentioning is what they call their varieties of ya dong. Like “Jameson’s” is a Whiskey, our type of ya dong is called “Krang Puying” or in English, “Moaning Mistress”. Other names of popular ya dong include:

• horse busts stable
• manly man
• murmuring lady
• old man rapes elephant (personal favorite; it has a nice nutty aftertaste.)
• male elephant power
• rama goes to war (also a great ska band from the 90’s?)
Travel for me, besides meeting people, is all about their food and drink. Really the food and drink make up the people and vice versa. This is why I always like to travel ala carte, and never like to split the bill.
Rs
P.S. Cultural Curiosity: In Finland when done with your meal you put your fork and knife at 5 PM on the plate. In the US you put them at 7:20 PM. In Thailand you put them at Noon. Funny how every country has a different time to denote being finished eating.