Met the girl at the airport. I love moments like these. They are so very rare. Travelling for me has always been a solitary activity. Perhaps being an only child with flight benefits from a very early age made me love to go forth with reckless and lonely abandon. I love travelling alone; it’s really the best way to discover a new place. It forces you in many cases to get into the sort of good trouble that you wouldn’t normally within the comforts of a familiar partner. I suggest it to any wayward college age kid to buy a ticket and just go. It’s kinda the same advice I give people who want to get into film; pick up a camera and shoot. Hemingway once said “The secret to life is living. It’s just that simple.” Alright, I’m not sure if Hemingway ever said that, but it is certainly possible. It sounds like him and there are no adjectives, so, yeah.

While travelling alone is a magic way to discover yourself, it is also not surprisingly the only real way to get to know a person which is why I was very excited see my girl on the literal other side of the world. Here we were two new animals, unclassified from the concrete jungle that normally defines us. It’s like the Hunger Games IRL. (I called Katness if anyone is wondering.)

We spent a mere few hours in Bangkok, cruising the airport terminal amazed that they had a Boots of all things for us to pursue (no sausage rolls, damn you Bangkok). We then hopped a short flight to Phuket, gateway to Thai Island Paradise. Hopping a snazzy cab in Phuket we made our way to the Indigo Pearl, which to me sounded more like a Battlestar Galactica spaceship then a hotel, and, I came to find out, t’was. I can’t really say enough about the Indigo Pearl. It’s the kinda place that can only exist in a generally lawless and beautiful country like Thailand. The resort rivals most small towns in it’s mere size. The lobby wasn’t so much a lobby as it was a port for people. Open and vast, dark wood and pretty blue jewels and everything with a steampunk edge. Built on an old Tin Mine (c’mon, that’s awesome) every corner of this luxury resort linked back to its roots with an industrial flair. Tin I-Beams holding up thatched roof, comically large industrial valves for faucets, and even wrench and screwdriver silverware in the restaurant. This place was a designers wet dream, and a welcomed sight to a guy who has been in the bush for ten days.

Taking a private golf cart to our room (is there anything other than a private golf cart I have to ask?) my jaw was open most of the way; a giant stretch of pools, restaurants and bars as far as the eye could see. Grounds so immaculate and imposing you thought a gay Druid wedding planner was given free reign to do his worst. It was, from an architectural standpoint, inspiring. 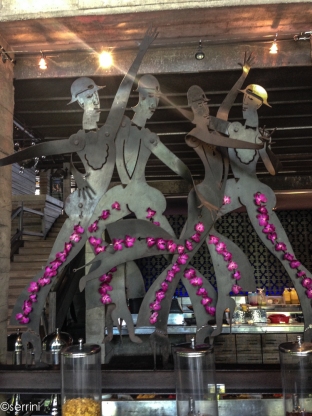 one of many restaurants 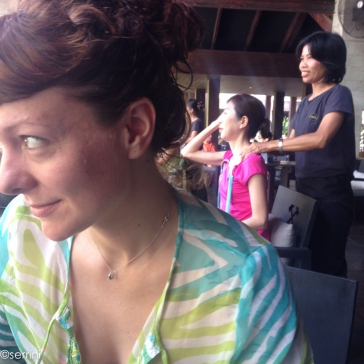 Yep – they give you massages at breakfast.

Then the room completed the dopeness.

Wood, and concrete, and tin. Glass and rock and fauna. Huge Ghengis Kong-esque bathroom doors that any father would feel epic behind for a morning ritual. It was wild. And then… the balcony. Can you call it a balcony when there is a huge two person onyx tub on it? No, I didn’t think you could. We’ll, when I asked Miranda if she wouldn’t mind booking the hotels for our leg of the trip I had no doubt that this creative director/producer would come through. I just didn’t know she was gonna make me question if she should have become a private concierge for the rich and famous.

fruits of our labor

balcony with a bathtub? Whats next? Bedroom with a bidet?

This was an exquisite treat, and we could have easily spent a week there in happy solitude. We decided to slide out to the beach and see what southern Thailand had to offer. Bathtub waters, orgasmic sunsets, stiff cheap drinks, and basically paradise on earth was the answer.

dinner on the beach.

in the shadow of delight

It was a fine first day, fine indeed.