Bangkok. You know what they say, one night here, and the world is your oyster. Clammy, stinky, and wet; and during the festival of Songkran, it’s just like that. (Long way to go for a Murray Head joke, but worth it I think.)

So yeah, let’s get one thing out of the way: there is a lot of sex around. However, if you’ve travelled a lot, frankly, that’s the boring part. People have lots of different reactions to prostitution; some excited, some terrified, some gratified, some horrified. Frankly, for the one commodity on the planet that anyone can sell, just for being alive, I find it a bit, well, meh.

So lets focus on what makes Bangkok Bangkok other then getting someone to suck your c**k.

The Sukhothai Hotel, besides being fun to say, was a stunner. Big, beautiful, overly graceious. The staff was warm and extremely helpful, The rooms were stunning, modern and with a toilet that wiped your ass for you. Oh, the breakfast buffet was bar none one of the best I’ve ever had the pleasure to graze. If you go, stay here; it’s near Lumpini park, perfectly away from the chaos of old downtown, and easy to get to from the airport. A tripple play.

A beautiful malai (flower ring) and khan (metal bowl) along with chalk to bless objects and people (usually I dont like to consider people objects, unless it’s fun, like slapping chalk on them). The kit is supplied so that you can perform nam om, the water ritual, where you are blessing someone by sprinkling water on them. Of course, this is an ancient ritual, and after years of evolution, along with the advent of RedBull, today it looks a little something like this:

I had heard that the entire city comes out to play in a giant game of waterfight. What I didn’t realize is that no one was exaggerating when they said the entire city. 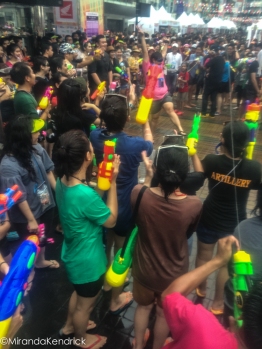 Of course a day of all out warfare made us quite hungry… luckily there was plenty to eat on the streets. 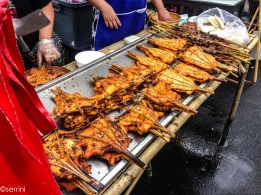 Delicious ramen with savory broth, grilled and splayed chicken, and lots of fresh veggies and fruit all over the place. In a word… heaven… After a good two hours we were soaked to the bone and well fed, which looks a little something like this: 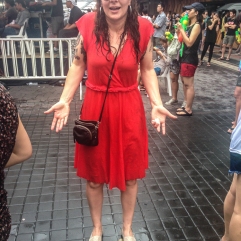