I met Joel right outside of customs at the Bangkok airport. I never formally met Joel, and frankly, didn’t really know much about what I was getting into. It sounded exotic, dangerous, and most of all, fun, so I was 90% there. As long as I had a place to stay and could do my job properly, I’d be living the dream. Joel seemed on the ball, an honest guy, and most of all, excited. People who are excited about what they are doing, no matter if you’re a garbage man or a tax attorney, make me happy. Passion is universal.

We jumped into a really nice transport van driven by Song, who spoke no english but pointed like a champ. So we’re driving. And driving. And driving. And finally, we “arrive” although if you saw the place you would have doubts you were anywhere let alone where you were supposed to be. We’re camped out in a place called Chon Buri, a South East dry district in Thailand. Dry because there is about a two days less rain than other places in Thailand, not because they don’t drink alcohol there. They drink. In lot’s of different ways, but I’ll get to that later.

Chon Buri It’s basically no where which makes it kinda amazing. While it lacks almost complete existence, it is home to one thing; Buffalo Racing. 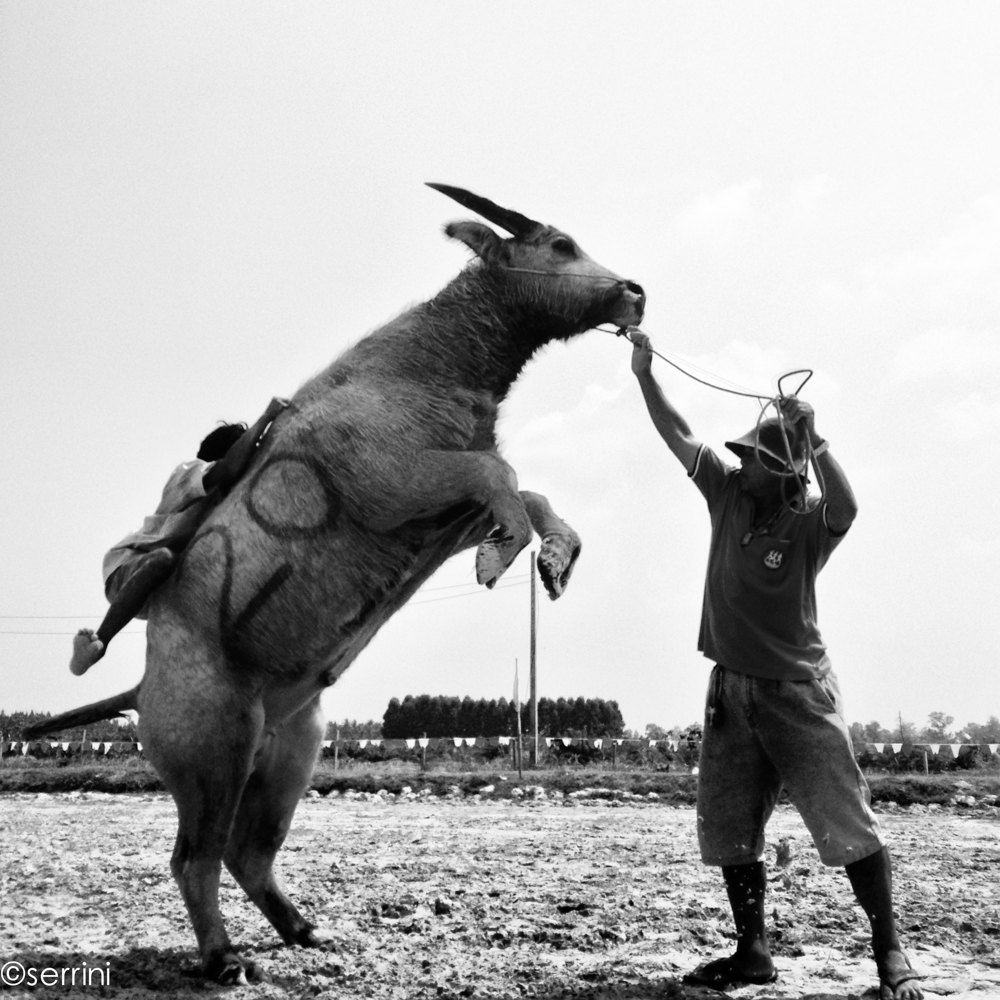 While it doesn’t take much to convince me to get on a plane and come fly a drone around, Buffalo Racing definitely perked up my ears, mainly because I had never heard of it before. Ever. And while it might seem pretentious, that is pretty odd to me. I mean, I love the internet. I love blogs. And for something as exquisitely exotic and certifiably crazy as buffalo racing to never even ping on my internet radar was quite amazing. 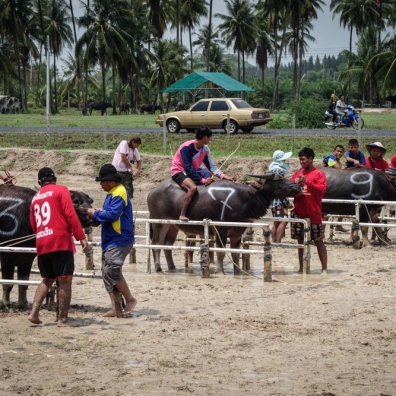 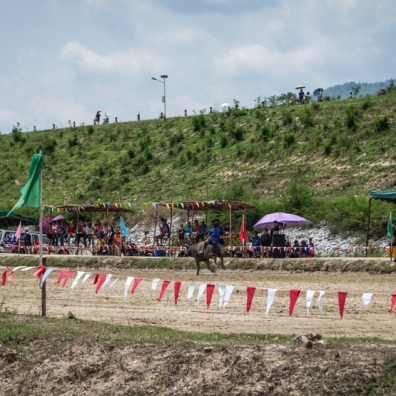 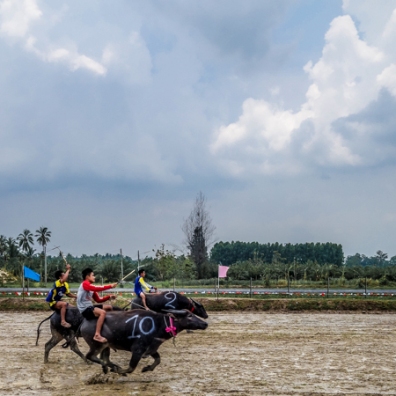 Kwai Keng, or Buffalo Racing, has been around in this “formal” incarnation for about 150 years. Originally a way for rice farmers to let off some steam (and make a little side cash on their luck) the event has become a big back alley festivity that brings a good chunk of people in to watch, race, and bet. We’re not talking Madison Square Garden numbers, but definitely WNBA numbers.  For the purposes of the shoot, they organized a special race to take place, as the real races happen in the Fall at harvest time. I immediately understood one of the benefits of shooting in Thailand, where you could have an annual event happen 6 months early, and people not only don’t charge you for it, but are happy to move it for you. We would be shooting over the next following days, and I was definitely looking forward to see what madness this event would bring.

Racing aside, we eventually made it to our “hotel”. It’s kinda an apartment complex that just exists there on the road. There isn’t much around; a little sad market that sells some sundries, and lots of chips and beer. Next to it is a little “restaurant”; basically a wok, and a few tables. Everything is new; like just built. Like paint still wet. But like Stalin built it. There is no style or decor, it’s just basic. Basic of basic. Cave with an outlet is kinda what we’re dealing with here people.

“I made sure you have the best room in the place,” said Joel, extremely proud and excited, “it has a television and air-conditioning.”

This place is hilarious. The bed, was pretty much on the floor. The furniture was all new, so new it had the protective wrapper on it still. My closet had the plastic wrapping on the hanger bar, but lacked hangers, which I thought was just the right touch. The TV (a 13 incher CRT job, remember those 1989?) had a miraculous 216 channels on it. Seriously. I counted. They were all either in Thai, Chinese, or Hindu. 189 of them were K-Pop/Music Videos that played the same 5 music videos.

At the very least, I thought, the bed was nice and big. I then tossed my phone on it and it broke. It broke. Cracked. Placing my hand on it cautiously I quickly realized that it was basically a piece of plywood with a vinyl cover. 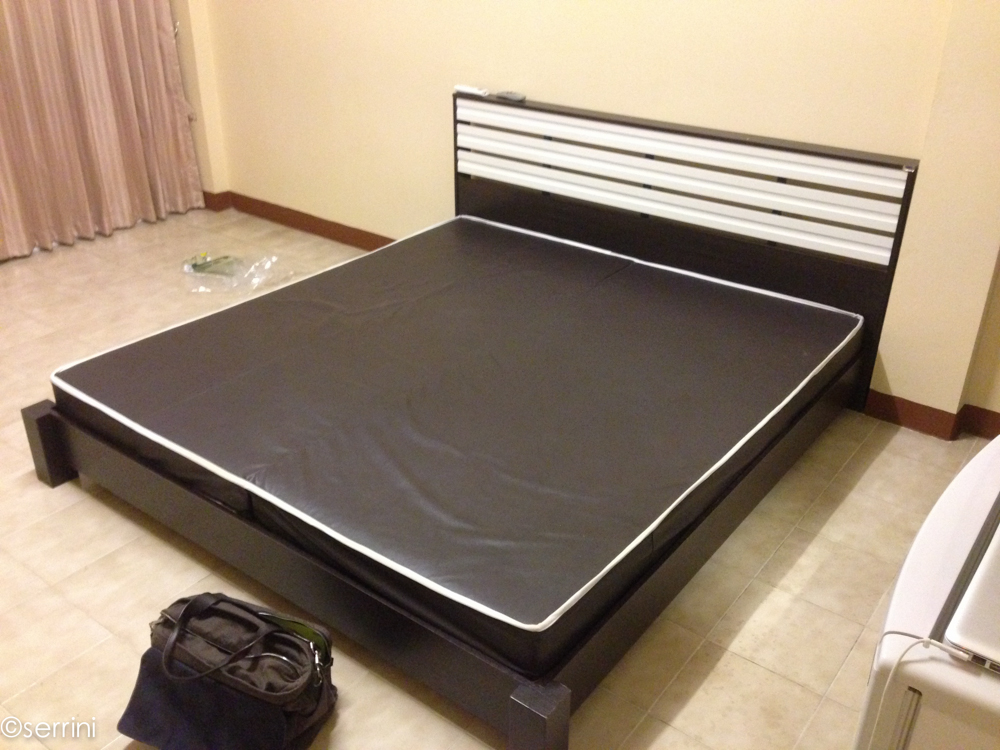 Brand new mind you, which kinda blew my mind. I mean, someone had to design this. There was piping around the edges, and it was made well. Someone had to actually say, “ok, so we’re sleeping on the floor. I need a solution for making that more comfortable. Wait, got it. We’ll take some wood and wrap it in vinyl and raise it 6 inches off the ground.” then another guys is like “brilliant Ted, but what if, and just walk with me a minute, we put white piping around the edge. You know, to class it up a bit?” And then they had a martini lunch celebrating their new product, “the mattress”.

I was pretty much in awe, until I saw the “bathroom”.

The shower had a knob where water came out. You get just water temperature. Whatever temperature the water is at that time is the temperature of your shower. The funny thing is that at the hottest part of the day the water, which you would love to be cool, is at its hottest. Irony. In the end I had to respect the uniqueness of this bathroom; there aren’t many places you can bathe and take a shit at the same time. Pretty much the Ganges and here.

And it may sound really strange, but, I was extremely happy. I live in Manhattan. I have a sweet apartment, with running hot and cold water, cable, internet, and a city where anything you want from sex to a slice of pizza is available 24/7. Living like that can make you forget what you are made of, who you are, and what is really the value of comfort. So an experience like this I look at with hungry eyes, happy for the chance of discomfort, and the mandated focus on the reason I’m here in the first place. Let’s just hope that holds up for a month. I mean I’m not crazy.

After getting comfortable in my room, I headed down to met some of the “crew”. Another producer named Ray who was German, but had been living out in Thailand long enough to look like he’d been living out in Thailand. Ray had a comically thick German accent and loved to make off-colored Nazi references. It was like Mel Brooks knew I was going on trip and sent me a gift. Another nice kid named Weiss from South Africa that loved animals and loved hunting; a combination I always find interesting. He knew everything that could hurt, poison or kill you in Thailand and wasn’t shy to point it out to you at every turn. These guys were red and leathery with piercing light eyes. They looked like they worked on the docks, and knew what the business end of a knife was used for. Another glorious example of how the film industry takes all kinds.

Along with Joel we sat outside, shared a bowl of noodles, and drank several very cold beers in the afternoon heat. We discussed the film, traveling, meats we liked to eat, and places we liked to visit. We watched a massive thunderstorm roll in, over us, and out the other side leaving again a beautiful day.

While life here seemed slow and relaxed, it sure seem to cover a lot of ground in a short amount of time. Eventually, after trying all the chip flavors in the shop (“Mexicans” was my favorite, go figure) We rolled out to dinner, at the shopping mall about 10 minutes away.

A giant TESCO in the middle of no where. Inside the Tesco there were other shops, anything you could imagine; barber shops, cell phones, dentist. It was like a small town. This is what I imagine the post apocalyptic future will be like; irradiated jungle badlands for miles, with a giant climate controlled warehouse filled with a village of commerce defying the nature surrounding it. This place was frightening with its variety; they even had a Swansons and Dairy Queen. As long as I can get my Blizzard on I’m good. There is something I hate about these places, mainly, it’s a parasite culture in a foreign place, but there is something miraculous about it as well, like taking the lowest level of art and raising it to museum quality. It makes me think of Charles Bukowski and Robert Moses at an S&M party. There is something perfectly mind-blowing about a perfectly short, brown Thai man in a red and white soda-counter stripped shirt saying in perfectly broken English “Welcome to Swanson’s” in the middle of a desolate jungle province.

Back at the hotel I had a ceremonial Alka-Seltza and put on GnR’s “Welcome to the Jungle”. I peered out the window into the darkness. No street lights, no stars. Just jungle black. What would tomorrow bring, who knows. As for now it is late, and time to sleep on my wood plank.