So, Denver. You go away for the summer and come back a cool kid? Looks like someone discovered American Eagle and leather wrist bands. Good for you.

On our last post in a series about Denver, we take a good, hard look at pot. Marijuana. Mary Jane. Buds. Chronic. The Cheech to my Chong. I went to Denver to find out really what the deal was with dealing, how the processed worked, and if it was, at all, interesting. It was, but perhaps not for the reasons you might think. 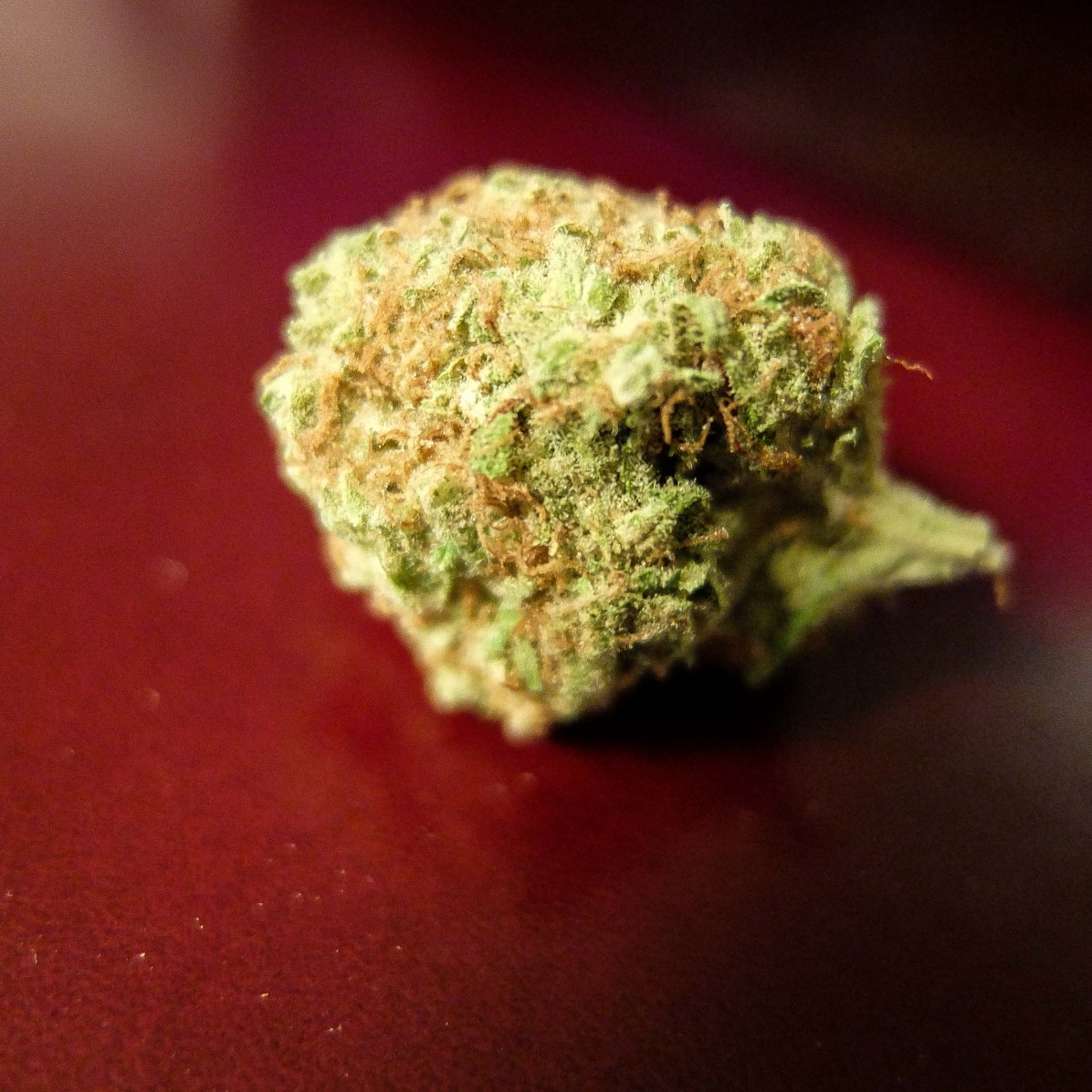 Without further adieu, how to buy pot in Denver in three easy steps.

This may seem like an obvious step, but trust me, it isn’t. I thought there would be shops that sold weed that you would walk in and buy said weed. Not exactly. It’s not like “hey, I need a new pair of sunglasses, let me go into this sunglass shop and buy a pair of said sunglasses”… apparently it depends on what kind of eyes you have. (long way to go for a visual metaphor, but I’m the kinda guy that’s willing to do it).

First thing to do is go to your trusty ol’ smartphone and download an app for finding weed (read that sentence again, then think back 10 years and realize that half the words in said sentence wouldn’t even make sense … dear God the future is bright). I chose Weedmaps because I trust reviews. It’s a great little app, and it does the job. For your consideration:

You can see that Denver has a few more dispensaries then NYC to buy weed (my guy delivers though, so, sorry Denver, suck it.)

Now you’re saying “Rob. You just said that it wasn’t that easy to find places to buy weed. It looks like it’s easier to get some El Chronico then it is to get a Starbucks Espresso.” Well, yes and no. What I didn’t realize is that there are different types of dispensaries; some are medical, some are recreational. These, for instance, are not places I cannot buy pot:

Number two is a fun one. Not everyone has to do it, but you’re going to want to. Once you actually find a pot dispensary you can legally purchase the goods at, it is important that you get a bit freaked out. The process is in no way what I would call refined or even enjoyable. I expected something more along the lines of my Brooklyn cheese monger, who goes over the particular characteristics of each variety, where it is from, and what wine is best paired with it.

None of that here.

Entrance into the shop is nothing less than what you should expect from an underground rebel base in Eastern Europe. You have to hold up your ID outside a generic, steel reinforced door, into a tiny camera with a key pad. You then state your name. You then wait for the longest 5 seconds of your life, and be greeted by the grating rattle of a buzz as the door is electronically unlocked. Inside the shop everything is super clinical. White on white on white. Super organized, devoid of any character or personality. It kinda looks like Phillipe Starck opened a head shop, sans oversized flowerpots. What really got me was the staff; they don’t want you in there, or at least, it seemed like that to me. Although it’s “legal” they have a hurried air about them that makes it feel like you are doing something totally shady. Mind you, this is before we got high, so paranoid we were not. This was real.

Now, there are dozens of products here. Dozens of strains. Dozen of edibles. Asking questions about them went something like this:

me: “Hey. could you tell me a bit about the different varieties you have here?”
them: “do you understand the difference between sativa and indica?”
me: “sort of…”
them: “well this side is indica, and this side is sativa.” 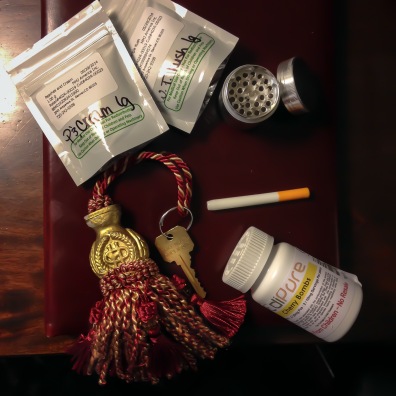 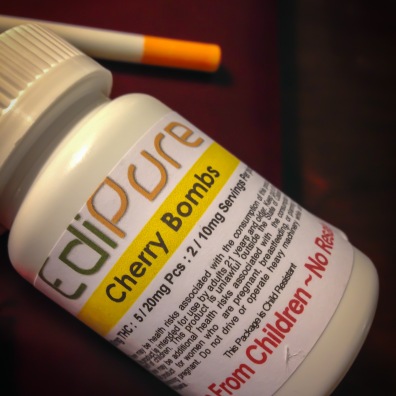 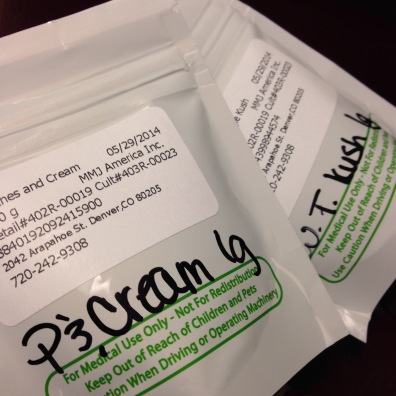 In the end we chose one gram of indica named Peaches and Cream, and a gram of sativa named White Truffle Hush, plus some cherry drop edibles. We paid cash, as this is a cash only industry. Here is something very interesting about legally buying pot in Denver; you see it’s totally illegal.  The federal government still considers it a drug, so things like credit card companies and banks cannot lawfully take money in from the businesses. Therefor everything is done with cash; you buy goods in cash, they pay their employees in cash, they take bags and bags of cash from the store to the banks. I guess that’s why they are so fucking up tight. It reminded me of that scene in Lock Stock if Lock Stock and THX 1138 had a film baby (Ill let you all draw your own comparisons between those films. THX George? Did you know something we didn’t. No, of course not. Go fuck up another Star Wars will ya).

All in all the total was 70 bucks, which isn’t bad, but for once NYC wasn’t the most expensive place on the planet. One of the reasons is because of the tax, a whopping 28% that garnished about 2 million just in the first month for the state. Amazing that while federally the sale of marijuana is not legal, it is legal to tax it. Taxation like that would surely lead to tea party riots, save the fact that tea is caffeinated, and pot heads couldn’t rally if they were giving away free churros. 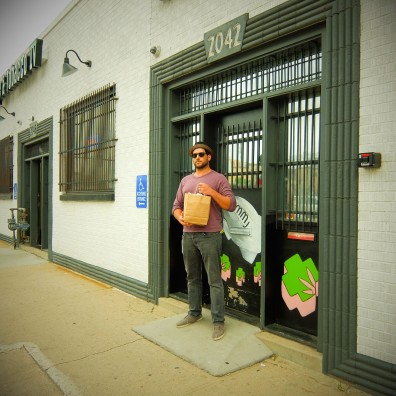 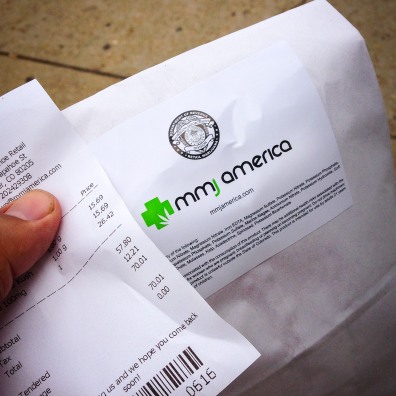 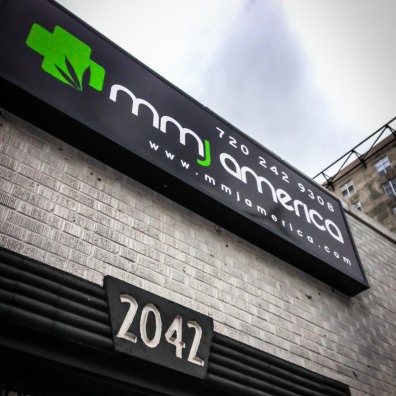 3) Find a place to smoke it like you still live with your parents.

So you’ve found a place to buy it, you’ve legally purchased your buds, and now you want to smoke it. Good luck! Denver, as far as I can tell, is a super clean, conservative city. You hardly see people smoking cigarets let alone lighting up a J on the street. We didn’t find any cafe’s like they do in Amsterdam, and I smell someone smoking weed on the street way more often in NYC then I did in legalized Denver. So, where to do it? 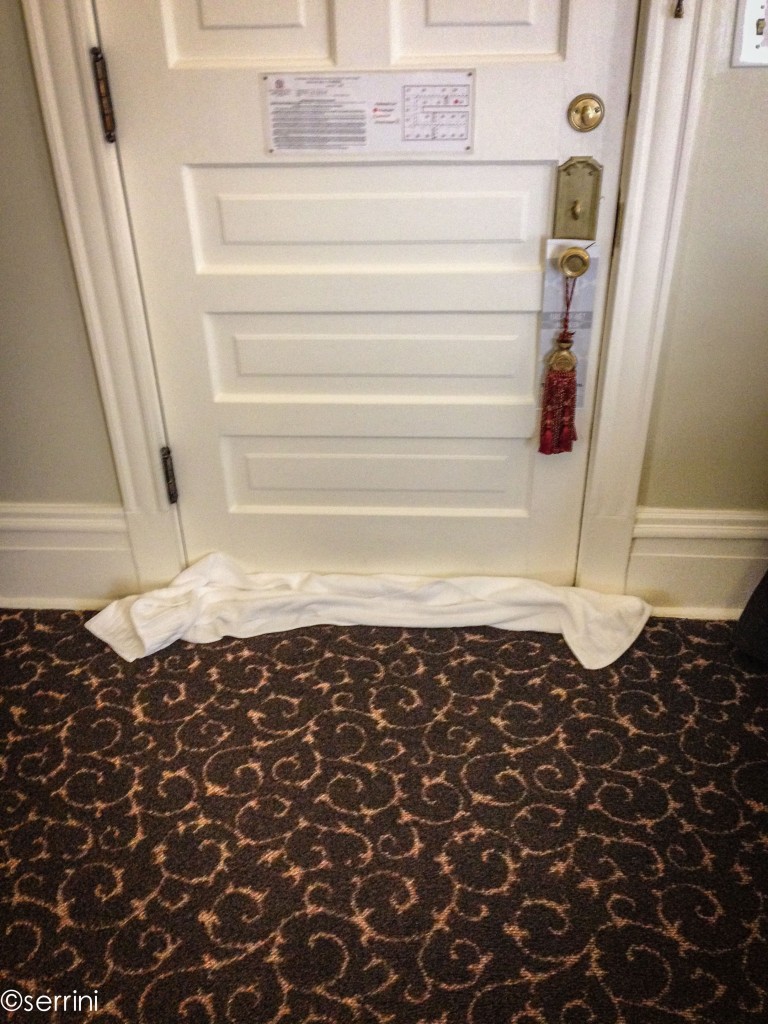 The thing about the whole process, besides having to find the right place, and the clinical/cold method to purchase, is that there really is no reason to smoke once you have it. That may sound weird, but I’ve been to so many other places in the world where smoking weed enhances your experience; the butterfly sanctuary in Santa Barbara. The Vondelpark in Amsterdam. The Natural History Museum in New York. For me at least, there is a recipe for life, and certain ingredients can be added to make a perfect meal. Denver, as a city, didn’t need pot. It had clean public spaces, fantastic breweries, and lot’s of great restaurants. While you can make the argument that pot could enhance all of these places, it’s kind of like adding Sriracha to any meal. You can do it… but… should you? Some things just go better together, and Denver with pot seemed like Yoga and Bowling. Sure they’re both fun, I just don’t see why you would do them together. 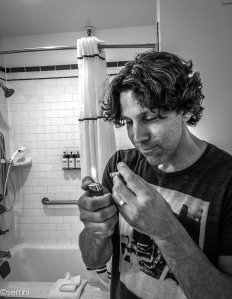 So off in our room we smoked our weed and got high. The weed was good and did the job, and riding around on bikes all day was a pleasant experience. I personally really liked the edibles, because you’d have one in the morning and all day you just floated through the city. I guess what I missed was stimulus. Pot, for me, always makes me hyper aware; my mind works faster (at least, different…), I run down streets of thought versus stroll down them. Denver is a pretty laid back town, spread out, with a pretty common pallet of culture and color. Maybe I’m used to NYC, but it wasn’t frenetic enough to energize me, nor was it laid back enough to sooth me. Pot just seemed out-of-place here, and while it was legal, I don’t think one person spoke about it, smoked about it, or even bothered about it.

I asked one kid at the bar what the deal was with legalizing pot; if they noticed any change in the city, or the people. She said, “you know, it seems like its been legal for a decade, because you could get medical marijuana for so long. Making it legal “recreationally” just was another day in Denver”. I guess that’s what I didn’t expect. In another city, the possibility to capitalize on a new market would be evident; new restaurants that were pot-centric, special pot-head movie nights, and of course, pot mini-golf. From the outside Denver looked like any other quiet city in the world, who’s mini-golf had 9 holes just like it did in the Bible. I’m not saying it’s a bad thing, but if you’re looking for something different, the only thing that is really different about Denver these days is how much it was like yesterday.

P.S. Upon leaving we threw out our pot, most of it unconsumed, and we felt horrible about it. We wondered how much pot goes wasted for travelers who cannot bring their goods home with them. Our cabbie (who was ethiopian, and apparently, so are most of the cabbies in Denver, which I found super interesting) told us that we should have brought the pot with us back to New York, because, if they do find it they just take it away, no harm no foul. Of course this is not a recommendation under any circumstances, nor do I know if that is even remotely true, but he said that it happens all the time. He also said that most people give it to him before they leave, to the point that he is planning to open up his own shop outside the airport for people that are laid-over or snowed in. Now that is the American Dream if I’ve ever seen it and I wish Abdel-Alim the best of luck.

4 thoughts on “denver. how to buy pot in three easy steps.”